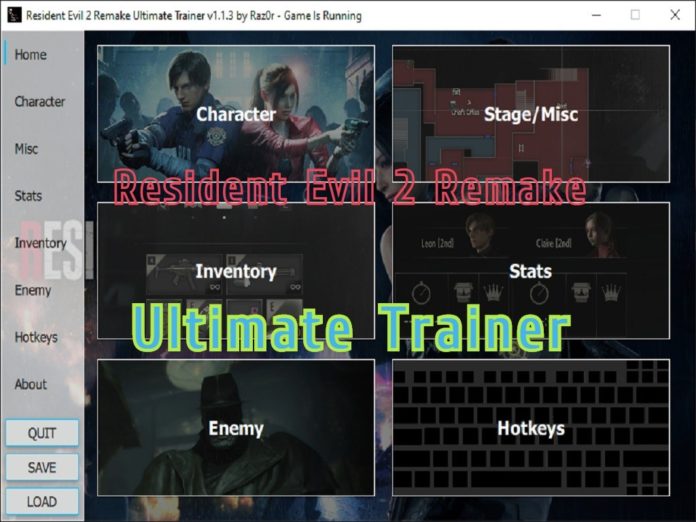 Here we are providing you is the most comprehensive Resident Evil 2 Remake Trainer. This trainer allows you to change the FOV camera, introduces manual flashlight, and allows you to swap character. Furthermore, this trainer can allow players to walk through walls, can disable recoil, and can increase both player health and speed. Naturally, this trainer also adds some “cheats” such as Invisibility, One Hit Kill, and Infinite Ammo.

It’s also worth noting that this trainer allows you to edit the Inventory/Item and brings some HUD adjustments. It also brings a universal key mechanic, freezing game timers and game difficulty adjustments. Further features are available below.

As always, save OFTEN! Use options as directed! Some events in the game are scripted and cannot be avoided!

Toggle on, and most things cannot kill you.

Press this to set your health to the value shown in the trainer. This is like an instant heal.

Toggle on, and most weapons and grenades that are equipped are unlimited. When you draw your gun and aim, it will reset.

Toggle on and most of the weapons, when fired, will not need to be reloaded.

Press this button to set your inventory space to the value shown in the trainer. The max appears to be 20.

Toggle on in Resident Evil 2 Remake Trainer and most of your enemies, including zombies, cannot attack you. Toggle off when not needed. This option may freeze the time in the game or freeze some scripts, so toggle back off when not required. If enemies seem stuck or otherwise are not acting erratically or adequately, use an older save, or toggle this back on and off after a save and attempt to get a new enemy to attack, which will reset the scripts in most cases.

Toggle this on, and many enemies will die very quickly. The trainer also turns on Player Invincible option automatically, so you vanish at that time, to prevent you from being killed by the extreme damage.

SPOILER! There is an enemy in the game that relentlessly pursues the player throughout the house. This option will make it such that you can explore and progress without the Tyrant attacking you. Please remark that it is scripted that you must be attacked later in the game, so the trainer will not prevent that, and the game requires that to happen to progress the story. However, before that portion of the game, this option is priceless.

In Resident Evil 2 Remake Trainer you can use Invisible To Tyrant feature. To use this, toggle the option on, make sure EASY KILLS is on, then shoot the Tyrant when it approaches to send him to a knee. If this option is on, when he gets back up, he will avoid you. NOTE that the Tyrant is in a superstate, and cannot see you but will also likely not be killable! Use the other TYRANT option if you wish him to be able just to stay incapacitated at one spot.

If the game player uses the trainer with the demo, this will reset the demo clock.

Toggle on, and the trainer will try to give you unlimited ribbons in the game.

Toggle on, and many weapons and knives have unlimited durability of these weapons.

Toggle on while playing the game, and it resets the time that you’ve been playing the game to 0. Toggle back off when you see it has reset. You can see your current time when you press ESC.

An alternate method to disable the Tyrant. Toggle on Easy Kill Enemies. Then shoot the Tyrant when he arrives, he will go down to one knee, then toggle this on and the Tyrant remains in that spot. Best to use this from the fresh load when the Tyrant arrives if you haven’t used Invisible to Tyrant.

Toggle on, then SAVE a game, and the total is set to zero. Toggle back off when done.

Toggle on, then walk around a bit, then the total is set to zero. Toggle back off when done.

Toggle on and many ballistic weapons, the aiming reticle instantly is at maximum accuracy.

Toggle forth, and many weapons have less or no recoil.

Some missions, like Sherry’s Segment, require you to complete in a particular time to earn the achievement trophy, or there is a shown timer in some sequences. Toggle this on to try and lock the timer.

Toggle on while playing the character, then press ESC to open the menu, then click Records, then scroll down to the Minimalist category, and the value is reset. Toggle back off.

Toggle on while playing the character, then press ESC to open the menu, then click Records, then scroll down to the Frugality category, and the value is reset. Toggle back off.’

How To Use Resident Evil 2 Remake Trainer